I met Captain Rocky last Friday morning for our second day in a row of fishing.  The winds 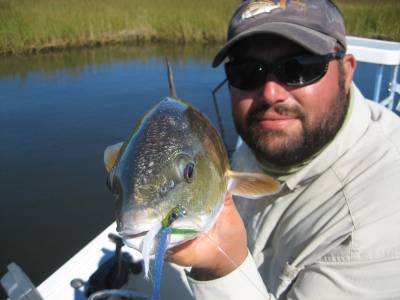 had let up slightly from the day before and hopes were high that we were going to get on the fish.  Rocky informed me over breakfast that he had acquired a new fly from the Gentleman Angler.  The Gentleman Angler is the same company that had asked us to test out their Rojo Grande Rods.  The fly we were to fish with is called the Redfish Clergy.  It is very similar to a classic clouser minnow with some nice additions.  The head and eyes are completely encased in epoxy and the tail has a tremendous amount of flash.  I was excited about the fly because it looked to have the two things which are key in catching

reds.  First, the fly looked to have a fast sink helping it get into the strike zone quicker and it appeared to be extremely visible.  After tying the fly on, I immediately knew that visibility was not going to be an issue.  The clergy glowed like a neon sign out front of a greasy spoon, alerting the redfish it was dinner time!  The first red we encountered answered that dinner bell by ravaging the clergy the second it hit the water.  The rest of the day went exactly the same with fish after fish unable to resist the sirens’ call of the Redfish Clergy.  After an amazing day of fishing we tallied the count and had somewhere near 30 fish!  With numbers like that I would have to say, the Redfish Clergy was a heaven sent.